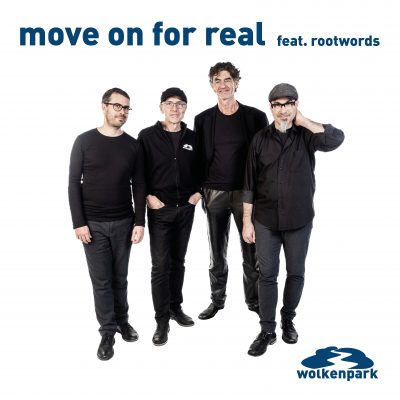 Move on for Real

«Move on for Real» was released digital only on 6th June 2022 featuring rapper Julio Mwansa Nkowane from Geneva, better known as Rootwords. Originally this was an instrumental composition by Jean-Pierre Schaller called «Old School», but it changed its name when combined with the lyrics. It’s a Drum’n’Bass inspired beat by Andy and Jean-Pierre with experimental Rhodes sounds by Julien and evolving brass phrases and loops by Kriz culminating in a bigband brass lick. Lyrics were added later, but fit perfectly to the groove and feel of the tune. The basics were recorded during three weekends in spring 2021 while Corona had destroyed all live gigs. These were live recordings, two to four takes for each track, which built the base of the full album.

Listen to all released tracks using the player…

×
Update Required To play the media you will need to either update your browser to a recent version or update your Flash plugin.

…or directly on the streaming service of your choice (selection below, there are even more; if you can’t find your provider below, search «Wolkenpark» on your platform).
Please like and follow us on Spotify and others, to bring us some resonance of our work. Thanks for your support!